Keep Up With the VIBE

Twitter has announced a new feature, an audio tweet… meaning you can now record your tweet in audio then tweet instead of typing. Beginning from today, iOS users should begin receiving the new feature.

The feature will allow users to record audio clips of up to 140 seconds and attach these sound clips to their tweets.

“So starting today, we’re testing a new feature that will add a more human touch to the way we use Twitter – your very own voice.” 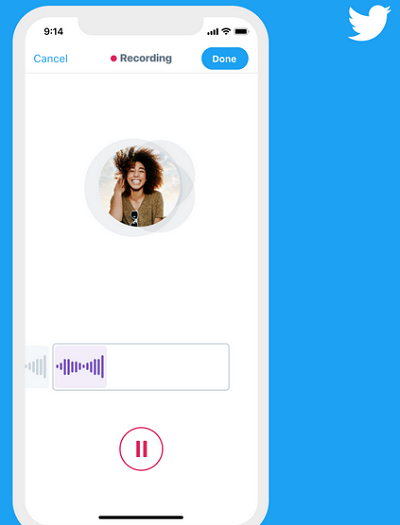 This will open the new Twitter audio recording interface, which will allow users to start recording their sound clips.

According to Twitter, if you reach the time limit for an audio clip, it will automatically start a second audio tweet and create a thread with all of these voice recordings.

Once users have finished recording their audio clip (or tweets), they will need to tap the Done button, which will return them to the traditional tweet composer screen.

Audio tweets automatically create an image in which users will need to tap to listen to the clip.

“Creating voice Tweets will be available to a limited group of people on Twitter for iOS to start but in the coming weeks, everyone on iOS should be able to Tweet with their voice,” said Twitter.

It confirmed that all users will be able to listen to audio tweets, regardless of the platform.

It is unclear at this point when Twitter plans to roll the feature out on Android devices; but for now, iOS users should continue to rock audio tweets.

Samsung Unveils the Galaxy A8 & A8 Plus

This site uses Akismet to reduce spam. Learn how your comment data is processed.